Frost last night shortened the 2019 growing season to 113 days, which is 74 days shorter than what I was accustomed to a few years ago in West Valley City.

It has not been devastating frost yet, as there are still many tomato vines still alive and producing where weeds and corn stalks have protected them.  The prediction is for even colder temperatures tonight.

A number of the tomato vines have yet to produce their first ripe tomato.  And it’s been a very tough year for hot peppers, eggplant, okra and melons which prefer hot weather.  There were a few weeks of hot weather in July and August, but it has been unusually cool, overall, for the past five months.

So far, I have saved seeds from 20% of the tomato varieties planned for 2019, and I am an estimated 300 hours behind schedule with this massive project.  Here’s the first sizeable batch of tomatoes processing for seeds: dwarf varieties on August 31st. 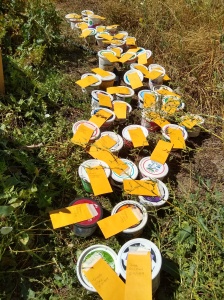 The “missing” 300 hours has been more than taken up with participation in two local farmers markets every week:

Saturday the 28th was the Utah Giant Pumpkin Growers’ annual weighoff event.  (Let’s not talk about the pumpkin I reluctantly submitted…)  The winner weighed 1,608 lbs.!

This one might be the most interesting of the lot: 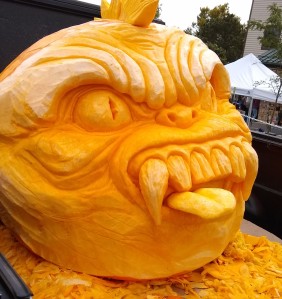 The giant tomato contest was extremely close.  The winner was a 2.18 lb. Big Zac, still hard green.  My largest submission was a 2.16 lb. Domingo:

This was the first ripe tomato of the season on this vine.  At least it, and another Domingo off the same vine, topped 2 lbs. – something I didn’t manage to do in 2018!