Now that the dust has settled from the spring and early summer planting season, my tally shows that I have planted 878 tomato vines of 426 varieties in 6 locations.  My goal, some day soon, is to plant in only one location, and also to LIVE at that location.  This itinerant farmer business is SO inefficient…

In spite of a number of setbacks this Spring (including the death of more than 700 tomato seedlings), tomatoes are finally starting to ripen in Utah County.  I am becoming convinced that advertised DTM’s (Days to Maturity) are only ballpark estimates, and are perhaps valid only under nearly ideal conditions:

Some formula for cumulative heat at the root level might be a very good prediction of DTM, still dependent upon variety, of course.  A well managed greenhouse or high tunnel would be an excellent strategy for getting early tomatoes.  Some day…

Anyhow, here are the earliest ripening varieties of 2017

I am not at the farm every day, so these are just estimates.  Lots more to come.  There are several thousands blossoms that have recently set fruit, following a few days of cooler weather (highs below 95°) and storms 7-12 days ago. 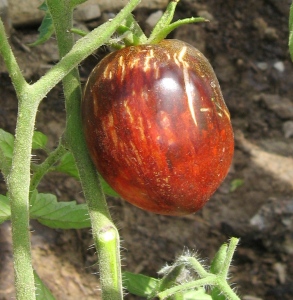 Perhaps the most unusual blossoms I have ever seen on a Monica (F2) plant.  This is a determinate, Roma-style tomato, and I’ve been trying for four years to get this stubborn variety to produce seeds.  Blossoms seem to have leaf tissue for sepals, and the sepals are mostly fused.  The reproductive parts are tiny, not at all like a typical tomato.  Oddly, there are a couple of fruits growing on this vine.  But I don’t see how most of these blossoms could possibly get pollinated. 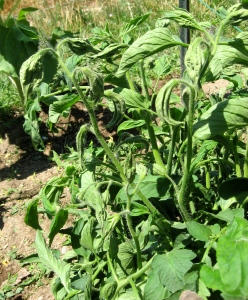 To date, the most impressive megabloom has not been from among the 48 tomato vines that are part of the 2017 giant tomato project in the high tunnel.  It’s from one of my new acquisitions from Russia, Серебрянный ключ. which transliterates to Serebryanyi Klyuch and translates to Silver Key.  All I know about this variety so far is that it has regular leaves and my source reports, “Medium tall vines, fruits are large, red, round and flattened with thick; meaty and tasty flesh.” 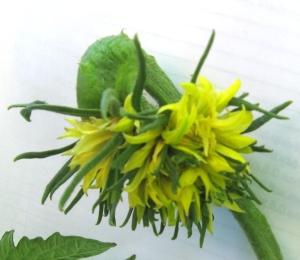 It remains to be seen whether this impressive 8X (or more) megabloom can set fruit in hot weather and nobody there to hand pollinate it several times.  (PS – blossom dead four days after this photo)

One megabloom that DID set fruit was a 4X on a Ранняя любовь (Rannyaya Lyubov, First Love) vine: 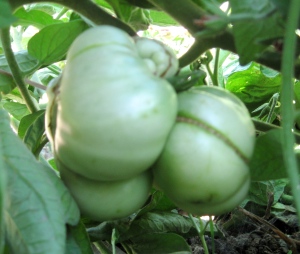 And another 7X blossom that is in the process of setting fruit on a Tamara vine: 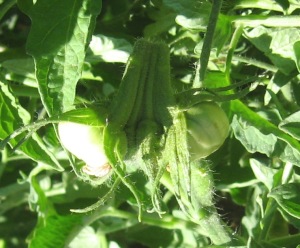 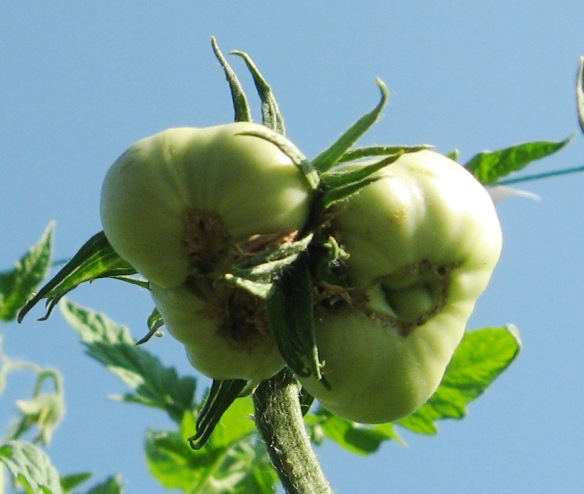 Updates about the 2017 Giant Tomato Project will be made to that Blog post shortly:

I spent several days tying up tomato vines that were, in some rows, a solid jungle-like tangle of tomato vines.  With recent rains, many of the vines had put down roots in the pathways – variety shown here is Joe’s Plum, but there were many more: 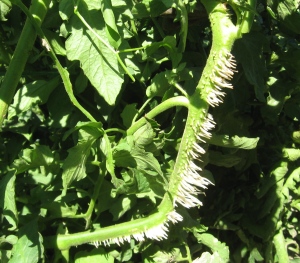 And anyone who has gone swimming in tomato vines knows how dirty your hands can get.  I use a rough rock for scrubbing my hands under running water to remove the glue-like tomato vine residue.  Loop ties on wrist are known as “Tu-It Ties” from the Klipon company in New Zealand. 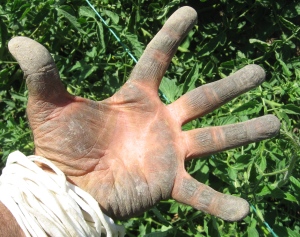 Among the 59 late, small tomato seedlings transplanted on July 7th, only one (Yellow Out Red In) died.  Here’s what this patch looks like, just 25 days after transplanting:

Most of these have blossoms, or at least buds already.  Since I don’t plan on installing supports for these vines, I’m trying a new way to label them – attaching plastic tags directly to the vines using a hole punch and a loop tie: 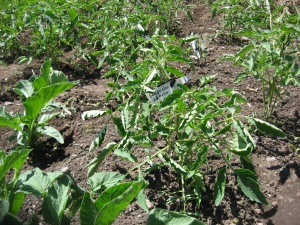 Coincidently (or not), the most impressive blossom at the smaller garden in Utah County is also on a Serebryanyi Klyuch, a developing 4X megabloom:

Also on July 29th, I transplanted a late-late batch of 16 tomato seedlings to replace varieties that had perished. 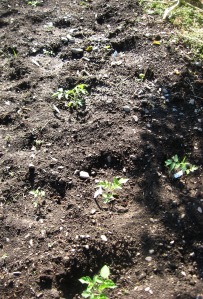 The healthiest among these  is Dark Queen.  This seedling is just 34 days from seed sowing indoors:

And a few other items:

Squash, Striata d’Italia (yes, this is just 19 days from seed sowing – the warmth and summer rains make a huge difference): 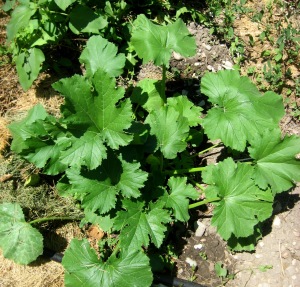 Melon, Yubari King (not expecting $100 per melon, but that would be very nice…):

Watermelon, Densuke did not germinate, but here is a struggling Hokkaido watermelon seedling planted a month earlier, which may be the same variety: 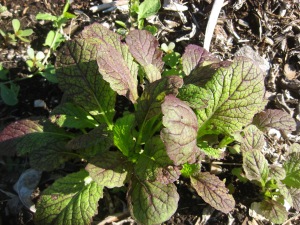