The madness has begun!

As mentioned in previous posts, one of my biggest challenges with cross-breeding tomatoes – and even simply trying to get fruit set of massive megablooms – has been an inability to obtain enough viable pollen.  It seems that we don’t usually get ideal weather for growing tomatoes until September and October around here.

So this evening I started a batch of precious seeds from giant tomatoes with the objective of producing large, unpruned vines which will be loaded up with dozens of viable blossoms by the time the production vines start to put out their first megablooms.  In theory, with plenty of good pollen available, the chances of fully pollinating megablooms will be much increased, and full pollination means bigger tomatoes.  We shall see…

Yes, Dan shared seeds of his new World Record with me!!  I started one seed back on 10-04-2014 (call it impatience or insanity).  It emerged but died within two weeks because of (#^%@#$*) fungus gnats.  Hopefully my system of completely bagging the young seedlings, along with keeping moisture levels way down, will help with this attempt.

There are precious few of these seeds left, and this is my last one!  The 7.33 Hunt as produced numerous 5 to 6+ pounders.

Another of Dan McCoy’s amazing achievements in 2014!  This one’s a close relative of the 8.41.

Bill Foss also had a spectacular year in 2014, with his largest coming in at a whopping 7.10 lbs.

Domingo is the new kid on the block.  Steve Marley set a New York state record of 5.75 lbs. in 2014, and Vincenzo Domingo (this is a multi-generational family heirloom from Sicily) grew 4 tomatoes on a singe truss with a combined weight of about 20 lbs.!  Sadly, Vincenzo passed away in December, 2014.  At least this small part of his legacy continues.

Another masterpiece by tomato breeder extraordinaire, Minnie Zaccaria, who brought us Big Zac some 15 years ago.  Zaczilla is said to put out 4-5 lbs. lunkers on every truss – it will be exciting to watch how this new development performs in the hands of the elite growers! 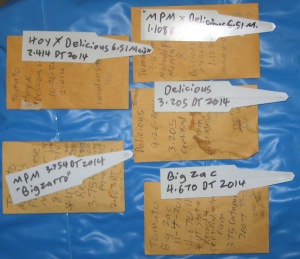 And a few of my own from 2014.  “Bigzarro” is temporary name, a place holder in case this strain of Michael’s Portuguese Monster (MPM) continues to do the bizarre things it did last year: 15+ blossoms fusing into one massive megabloom, suckers growing out of leaves and producing fruits, flower tissue fusing with stem tissue, etc. – traits that are distinctly different from the production line of MPM, or any other tomato variety I’ve grown, for that matter.

Total number of tomato varieties in inventory now tops 1,600.  Not even sure where I will be growing in 2015 – exploring several options.