Well, here it is, May 25th, and I still have not managed to start my garden, or even plant anything indoors to put in it, except for some seeds for the giant tomato project.

Ideally, I ought to grow at least 1,600 varieties of tomatoes this year to assure that batches of seeds from 2016 or later are available for all 2,700+ varieties in inventory.

With the recent move to a place with no garden, and the (much appreciated 👍) increased demand for seeds and seedlings (in part due to COVID-19…), I am very far behind schedule and there is no possible way that I could successfully grow 1,600 varieties this year.

So the discouraging, almost painful selection process must commence.

Second cut brought the number all the way down to 588 “MUST GROW” varieties, including about 150 new and 438 in great need of replenishing seed stock. Still far too many.

Third cut was 486. Now it’s getting frustrating. How do I just not grow a variety for which I only have enough seeds to offer 2 or 3 packets for other growers? Or how can I just not grow some of these 150+ new varieties? I have never been very good at saying “no” to a good thing.

So with some regrets, the deep cuts continue.

Fourth cut was 179 varieties. Most will have to wait until next year, when hopefully I will actually have a garden and a high tunnel in place.

On April 20th I planted seeds of 25 varieties of giant tomatoes. This is as much for fun, challenge and competition as it is for seed production!

These giant tomato seedlings are still in 6″ pots. I just have not had time to get the 20-gallon pots ready, let alone turn even one shovel full of soil to start a garden here.

Here is the latest photo of the giant tomato seedlings: 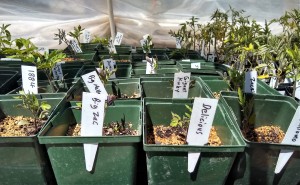 Actually, I did manage a few minutes of diversion the other day to pull weeds out of these large pots.

And for the Memorial Day “Holiday”, I splurged and purchased the most expensive tractor/toy that this little endeavor can manage financially:

These 20-gallon pots are heavy, awkward and not so easy on the back to try and carry 100′, one at a time; thus, justification for this indulgence.

So now, I am finally finding some time to consider seriously what I will plant this year. Since I really hope to install a large high tunnel, and I am so very late getting started, I need to grow everything in pots along the edge of the property, then move them into the (envisioned) high tunnel by mid-September to protect them from frost and hopefully still get enough ripe fruits for seed saving.

Whittling down the list even more, this fifth and final cut brings us all the way down to 105 varieties, in addition to the giant tomato project. Hopefully I’ll get those seeds hunted up and planted first thing in the morning.

I think I can manage that many in the fenced-in space where I installed the low tunnel. 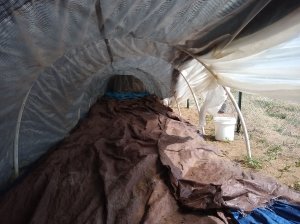 Between March 17 and April 09, I did plant seeds of 219 varieties of tomatoes (in addition to peppers, eggplant, and others) to share with other growers.  Then in early May it took me nine very intense days to pot everything up and moved to the low tunnel, close to 2,400 total seedlings. 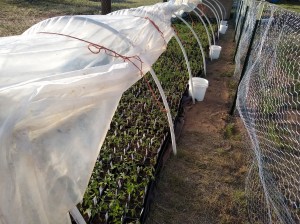 Over the past couple of weeks I’ve logged close to 2,500 miles delivering seedlings to gardeners and market growers throughout Utah.

I plan to set aside about 30 seedlings from that project to grow for farmers market and seed saving. So I may end up growing at least 160 varieties in total.

One intriguing new acquisition comes from Leh, the capital city of the union territory of Ladakh, near the very northern tip of India in the foothills of the Karakoram Mountain Range. Leh is located at an elevation of 11,500′ and 135 miles from the famous K2 peak, which is the second highest mountain peak in the world. A few days ago I received seedlings from a friend. Those have have distinctive, light green foliage, broad leaflets, shallow serrations, with a “wild” look that I can’t quite place.

More research will need to be done to determine whether this is already a named variety. But if it can grow in Leh at that elevation, surely it has a good chance of growing well in East Carbon, Utah at an elevation of only 6,200′?

The high tunnel is less than half full now, but still nearly 1,000 seedlings in search of a good home.

Snow is mostly melted off the mountains now. Here is Mt. Nebo again (elevation 11,928′), viewed from the east on May 23rd:

But it has been an unusually warm and dry spring, especially compared to 2019.

I did finally manage to finish extracting seeds from several varieties of squash harvested last October, including Striata d’Italia:

And “Thai Pumpkin”, probably some variant of Kabocha: 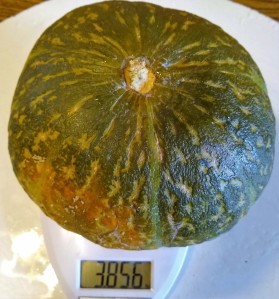 The predominant weed in the backyard, at least in April, was wild radish, likely Raphanus sativas:

Too bad I don’t much care for that particular pungent flavor, rather similar to arugula.

Next up – (finally) plant seeds of the tomato varieties from which I hope to save seeds this year. Then get the big pots moved to the low tunnel/temporary garden area and pot up the giant tomato seedlings. Then – well, it never ends or slows down…