The majority of heirloom tomato varieties produce on indeterminate vines.  If well cared for, the more aggressive vines can grow to 15 to 20 feet or more in a single season and produce 100+ lbs. of fruit.  You know those tiny, cone-shaped wire “tomato cages”? USELESS for indeterminate tomatoes, decent for peppers or eggplants.

There are numerous brands of larger and stronger tomato cages on the market, ranging from about $11 to $33 each.  I will not endorse any of those because I have not tried them and cannot imagine investing $20 per plant for 2,000 plants.  $40,000 just for supports?  No can do.

Homemade tomato cages made from concrete reinforcing wire or livestock fencing will run you about $6 per cage, so “only” $12,000.  Nope!

The past few years, I’ve settled on 6′ to 7′ T-posts and baler twine for making trellises.  T-posts are not cheap and they take some time and energy to install and remove.  And tying up twine is no small task either.  Cost is about $1.50 per tomato vine, plus an additional 5 cents per plant for new baler twine, unless you choose to reuse the twine.

I’ve settled on a maximum distance of 15′ between T-posts, with 8-10′ being ideal.  The secret to prevent sagging is to anchor the ends of the rows securely and re-tighten as needed:

At both ends of the tomato rows, I use 18″ long sections of rebar, driven into the ground at a 30° angle or so.

For both the twine used for the horizontal tiers (3-4 tiers is adequate) and for anchors, I use loop knots that allow for serious tightening of the twine – the type of knot one would use for tying down a load with tarp.

Note also the Tyvek tags.  I purchase those with wire pre-attached.  They are a little pricey (6.2 cents each) but well worth it, especially if the climate is sunny, windy or rainy; these can stand up to the weather for at least three years.

I’ve been using thinner and cheaper polyethylene twine to separate and tie up tomato vines to the horizontal baler twine.  At the plot in Kanab, here is what tomato rows looked like before tying up: 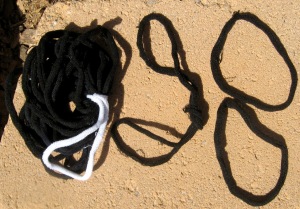 On another subject, it looks like Valencia Winter Melon will be the first melon variety to ripen this year:

This extra early variety is also very tasty and can store for up to four months without spoiling.  Dates back to the 1830’s from Italy.

Giant Pumpkins are a bust.  We prepared about 3,000 square feet of space with lots of manure and kept the patch mostly weed free.  Vines had world-class genetics, but it doesn’t matter anymore.  Combing every leaf at least once a day for squash bugs, killing up to 50 per day, destroying all eggs – weeks of this was not enough.  One vine died by mid-July, the other is near death.

The first vine to die:

The blasted little buggers – all of these were squashed: 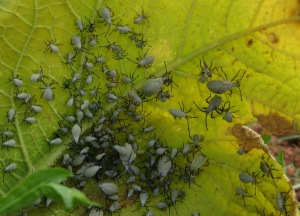