In 2013 we are raising (or rather attempting to raise) more than 1,500 varieties of fruits and vegetables. I am hoping to eventually develop a viable seed company, completely independent of the seed “cartels” which control more than 95% of the seed production in the U.S. Thus the insane (you have no idea…) number of varieties, about 57% of which are tomatoes. Here’s a link to the list of tomato varieties which are growing – and in many cases producing – now:

Here’s a mostly complete list of plant types we are attempting to grow, with mixed success in 2013. Numbers following “:” indicate approximate number of varieties of that type.  Types preceded by “*” indicate that there is a good chance that some will be included with CSA shares on 7-31-2013:

Taking on more than I can manage this year. I ended up with 880 varieties of tomatoes growing now, plus about another 60 which I lost due to:

A) Seeds never emerged
B) Seedlings died before planting
C) Vines died after transplanting due to bugs, birds (peacocks), or neglect

Total number of tomato plants is around 1,600 in 4 locations. I made a goal to get them all in the ground by June 1st. I was 26 days late, even with a lot of help. I donated around 1,500 plants to community gardens, etc. but still have about 500 without a home – just sitting in 3-1/2″ pots barely surviving.  No time or space to plant them.  Not sure I have the market to sell the fruit anyhow – LOTS of people grow their own tomatoes in this area.

For my giant tomato project this year I am burying vines. Giant tomato bed is 7′ X 33′ with 20 plants. This gives each about 11.5 sq. ft. With this method, this is really only enough space for 6 plants. Amended soil was covered with 4″ of fresh wood chips. Burying vines involved gradually pinning them down with large wire staples over a couple of days, then removing the staple, brushing away wood chips, digging a 2-3″ deep trench, amending with a blend of nutrients, sprinkling on some mycorrhizal fungal spores, removing leaves and blossoms as needed, pinning down the vine again, replacing soil, replacing wood chips, then watering in. I tried to leave 2 main stems per plant. I let suckers grow up until they have 2-4 leaves, then snip off the growing tips.

Space has long since run out and I’m to the point of needing to put in stakes to allow main vines to grow vertically now. Here’s what the bed looks like today:

The Michael’s Portuguese Monster (from my 2.610 fruit of 2012) is the best growing of the 20 vines and is the only one setting any significant fruit in the very hot weather we’ve had (most days 95-105° F in the past 5 weeks).  The plant measures 12′ across (curled leaves are due to heat stress):

Buried vines are thick with lots of root growth: 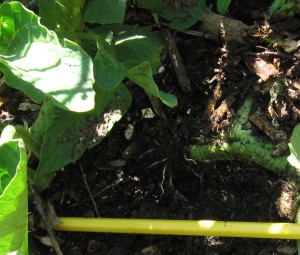 Even with very hot weather, at least a dozen unplanned tomatoes have set fruit:

I’ve been keeping my eye on a developing 5X megabloom:

This morning it began to open, showing just a bit of yellow petals.  I’m concerned that it will wither and die in the intense heat, as have hundreds of other megablooms so far this year.  So I’ve taken proactive measures: 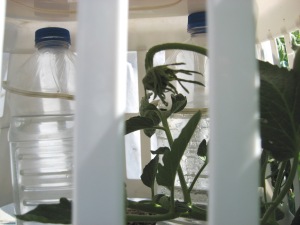 A small laundry basket with part cut out, three 2-liter jugs of ice, and a cloth cover.  On this first day, ice was completely melted by 2 p.m.  Looks like I’ll need to replace them twice, maybe three times a day.  Not sure how I’ll find that kind of time…

Quite a few other tomato vines in the project have (or had) megablooms, but none of significance have taken yet.  Here’s the full list of tomato plants in the 2013 project: