The growing season is REALLY over now – check out this forecast from earlier this week: 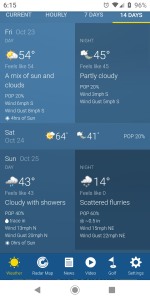 Actual low temperatures for three nights in a row were 16°F, 9° and 14°.  I harvested everything remaining and now have approximately 230 batches of tomatoes, eggplants, peppers, squashes, melons, etc. from which I am still working on extracting seeds.

For the most part, seeds are ready to go.  Following is a summary of my efforts at saving seeds from tomatoes in 2020.

With over 2,700 varieties of tomato seeds in inventory, I really need to be growing at least 800 varieties every year.  But the move last winter (fifth in five years) and the fact that there has never been a garden here and limited time and other resources have all conspired to make 2020 yet another challenging year.

In an effort to produce what I could manage, this was my selection process:

Following is a table summarizing what actually resulted from my growing efforts in pots and growbags.

So essentially, growing in 7-gallon growbags was only about 50% successful at producing enough tomatoes for seed saving.  Actually, other than tiny bites for flavor assessments, I “sacrificed” only 5 tomatoes this year for fresh eating; all the rest went for seed saving.  Well, I did cheat and snacked on a few cherry tomatoes here and there.

Here is the list of 37 NEW (to Delectation of Tomatoes) tomato varieties for which seeds are now available.  These will also be listed and profiled on the main website as soon as I can manage the time.

Some of these were REALLY taste!  Others produce beautiful fruits or were notably productive.  More details to follow here or on the website linked above.  The additional 100 varieties from which seeds were saved for replenishment are already listed on the website under the Seeds tab.

Now for a summary of seed harvest from everything except tomatoes.

Peas, beans, flowers: 17 varieties planted, planted in front of the front fence by the street; essentially total failure (thanks to deer…) except a few dozen seeds of – 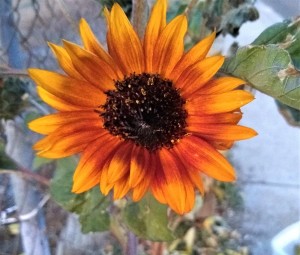 Above photo taken on October 24th, just ahead of the hard freeze.

Umm, yup, pretty obvious I have a seed obsession…

Also planted in early October: 27 varieties of garlic, about 450 total cloves!  Here is the completed bed, 3′ wide X 40′ long, with 2″ of compost and other organic fertilizers mixed in, covered with chicken wire to reduce damage from deer.

Here is a photo of a bulb (which consisted of 6 cloves) of one of the larger varieties planted, Estonia Red:

Hopefully by late September, 2021, I will have some garlic bulbs on offer for the first time ever!

I still have plants growing!  Before the light frost in early September, I moved about 20 potted pepper, melon and cucumber plants into the basement.  I set up a 400-watt metal halide light over them. 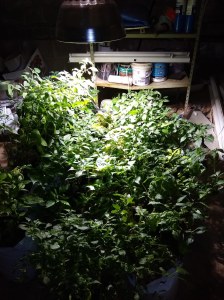 For the most part, the plants continue to do well.  But the aphid population absolutely exploded.  I released about 100 Minute Pirate Bugs in late September, but they seemed to have zero effect.  They are far smaller than aphids. 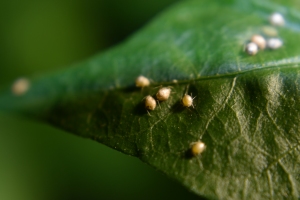 In early October, I released 150 adult ladybugs.  They are still doing well and seem healthy and happy: 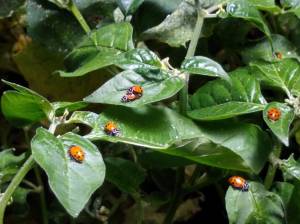 However, they seem to be gradually dying off (spiders?) or leaving.  So far, I have not observed any eggs or larvae.  The adults seem to stay directly under the source of light and heat, never venturing to the foliage and super-abundant source of aphids in the periphery.

Several of other interesting events, such as rescuing a Dark-eyed Junco that was trapped inside an old chicken house.  Here it’s briefly suspended in a spiders web:

And this series of photos of a giant sunflower opening.  I thought it would be interesting to take a photo every day, showing the progress.  Here are three photos in the series: 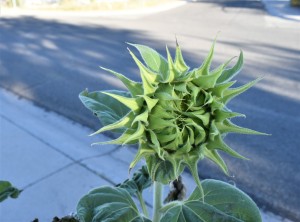 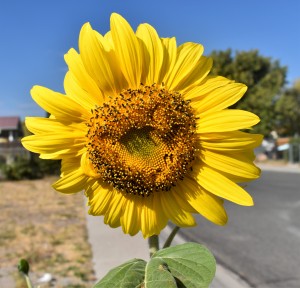 Oops, deer.  Devastating.  Herds of them have descended from the nearby mountains and just roam the streets and gardens, eating everything they can reach.

Plenty of evidence of their presence and damage.

I pretty much caught them in the act a few days later.

Estimated cost to install an 8′ tall chain-link fence around the perimeter of the entire backyard where I want to put in a garden and high tunnel:  $4,000.

Some flowers just started to open ahead of the hard freeze.

Also, it took two full, long days, but I finally managed to get my non-tomato seeds semi-organized, and actually have space to move around in the seed room.

Many hours still needed to fully process seeds, alphabetize, enter data, process photos, write up descriptions, put everything on the website.  Many hundreds of hours.  Not sure where those will come from!?

This site uses Akismet to reduce spam. Learn how your comment data is processed.