If you’ve read a few of my blogs, you may have come away with the impression that I am trying to do too much and infer that I’m overwhelmed.  Right on both counts – but I believe that what I’m trying to do can benefit many people, so I keep at it, glad for the opportunity to share seeds, seedlings and fresh produce with others!

So how in the world do I have time to conduct seed germination tests?  Of course the scientist in me and commitment to quality urge me to do a germination test on every batch every year.  But I simply do not have the resources to do that.  I’ll leave it at that – you can email me at dale@gianttomatoseeds.com if you want more details.

This blog post is in part a response to a YouTube video, published on January 2, 2018, in which two things were suggested.

Here is an example of a label for a variety that I named, in honor of the family who developed this over several generations.  Note that this is an older label, and the current world record (9.435 lb.) was grown from this variety. 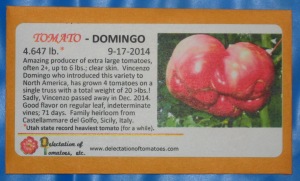 Please recognize that the big seed companies (who have many employees and lots of equipment I cannot afford…) typically stamp something like, “Packaged for 2019” on the envelope.  This does NOT mean that their seeds were grown in 2018!!  They could have been grown in 2013 or 2008 or even earlier, as long as the batch (which for them includes millions or tens of millions of seeds) still passes that 80% threshold for seed germination tests.  The dates on my batches are completely transparent – you know to the day when the tomatoes were harvested.  And tomatoes are usually processed for seed extraction that same day or at least within a few days after harvest.

2. Seeds I harvested in 2013 or 2015 are “old” and therefore less likely to germinate.  NOT TRUE!!  Despite conventional wisdom, or rather hearsay, or perhaps propaganda, tomato seeds can retain their viability for years, even decades, if kept from extreme heat or humidity.  Fortunately, I live in a dry climate and store my seeds in a cool basement, and have had no issue with reduced viability of seeds, even from a decade ago.  Below you’ll see results of a seed germination test which I think presents clear evidence that my 2011, 2012, 2013, 2014, or 2015 seeds are not “old” and do not have reduced germination rates.  I have been growing lots of tomatoes for a lot of years.  What I notice is that “fresher” seeds, that is seeds less than five years old, will typically germinate in 5-8 days, with a few stragglers over the next week or so.  Older seeds, that is ten plus years old, may take 10-15 days to germinate, with some taking up to 20 days.  But germination rates have still been 90% or higher on some of these older seeds – one just needs a little more patience and persistence.

The majority of germination tests I conduct are during the 3-4 weeks in early spring when I plant for my own gardens and for other growers.  This typically involves between 4 to 48 seeds of 500-600 varieties.  With over 2,100 varieties in inventory, you can guess correctly that I have to keep meticulous records.

So in Spring 2017, I planted 1,589 seeds from tomatoes that I had personally raised.  Many of these I planted specifically because of some concern over seed quality (seeds were dark, smaller than expected, etc.), though most were for replenishing seed supply and doing what I can to keep seeds relatively fresh.  Of these 1,589 seeds of 258 batches, 1,326 germinated.  That’s 83.4%.  Not nearly as high as I had hoped, but acceptable by industry standards.  I always try to include extra seeds, or seeds from multiple batches, if I have any reason to suspect a batch might produce less than 90% germination rates.  But yes, I still occasionally get reports of low germination rates.  In those cases, as stated in the About section of the website, I will gladly and promptly replace the seeds or issue a refund.  I do my best to maintain high quality seeds.  But I just do not have the resources or manpower or hours in a day to grow 1,000 varieties per year for seed saving.  I am working hard to keep my seeds replenished at least every five years.

On December 28th, I updated my previous post (Best Tasting and Biggest Tomatoes) with results of a germination test of seeds from several microdwarf tomato varieties that I raised in 2018.  As noted there, germination was 63 of 64 seeds, or 98%.

On December 31st, I started a seed germination test involving 800 seeds of the variety Big Zac (I have saved lots of those over the years…), 100 seeds each from these 8  batches:

My hypothesis was that 2018 seeds would have the quickest germination and the highest germination rate.  Since I controlled for variety (all the same), 100 seeds is a decent sample size.  Though obviously it would have been better to do at least 5 separate batches from each year.  I don’t have that many extra seeds for some of these years!  The following pictures show the process – click for closeup view. 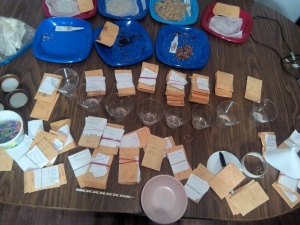 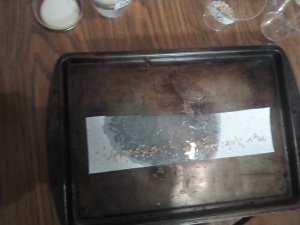 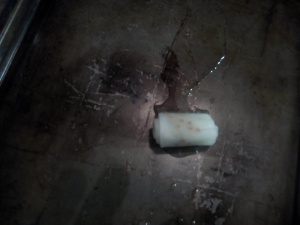 I placed this pan on a heat mat, with a towel between, as a bare heat mat is a little too warm for tomato seed germination.  Then I covered the entire setup with a towel.  After just 3-1/2 days, some seeds had just started to germinate from each of the eight batches.  I attended a Farm Conference and was not able to check again until January 6th.  So after 6 days plus 8 hours, here are the germination results:

This is much higher germination than I would have expected so soon.  I may check again in several days to see if more germinate, though they are all off the heat mat now.  I usually give my tomato seeds at least 14 days before I consider giving up hope.

Clearly there is no hint that the older seeds germinate more slowly or at a lower rate – no need to even conduct a statistical analysis on these results.  Hypotheses rejected!  If anything, the 2018 seeds look like they are slower germinating, as many of them are still quite small.

I use a magnifying glass and a pencil tip to poke each seed or seed hull to see if has germinated or not.  If it was firm and intact, with no sign of a root forming, I counted it as “not yet germinated”.  Following are some pictures documenting these germination tests. 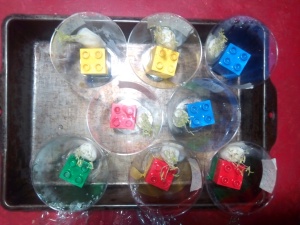 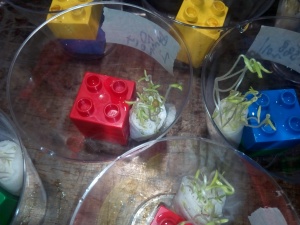 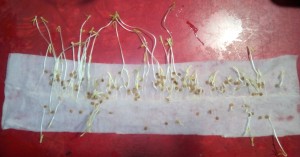 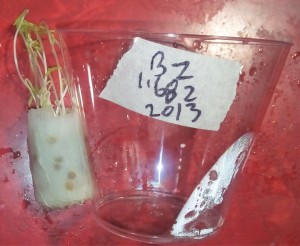 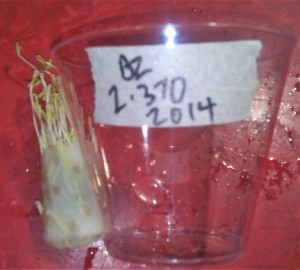 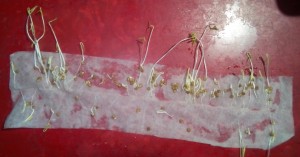 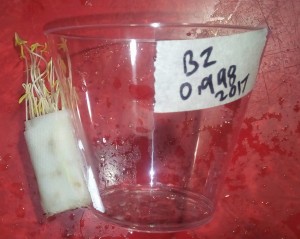 While at the Utah Farm Conference, I listened to several encouraging and motivational presentations.  Among these was a workshop presented by the amazing farmers at Quail Hollow Farms, who brought an Ancient Cave watermelon – with a handle on it!! – from which I extracted several RED seeds I hope to be able to grow out in 2019, contributing to restoring this unusual trait.  I tasted the melon as well, and it was still quite sweet and tasty, despite being off the vine for many weeks.

This site uses Akismet to reduce spam. Learn how your comment data is processed.